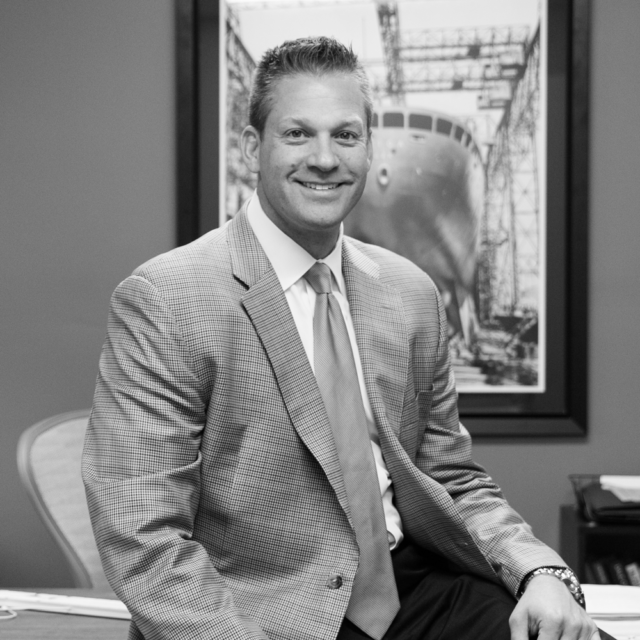 From the outside looking in, Dax Strohmeyer said, Triangle Manufacturing in Upper Saddle River exemplifies what a successful transition within a third-generation family business should look like.

That is mostly true, Strohmeyer added.

“My father and I have certainly butted heads along the way,” he said. “But, as time progressed and I started to become more involved in conversations surrounding leadership, slowly but surely, he would expose me to different areas of the business.

“There was a strategic method to his madness that I am now appreciative of, even if I did not always fully understand why I was doing the things he was asking me to do.”

When Strohmeyer, president, began his career at Triangle in the early 2000s, the engineer and manufacturer of medical and implantable devices, such as orthoscopic surgical instruments and joint implants, was a $20 million company, he said.

“This year, we’re looking to push into $50 million in terms of top-line sales,” Strohmeyer added.

And the company now employs approximately 240.

That is a level of success and growth that Strohmeyer said he and his family can be proud of in a rather competitive and capital-intensive industry. 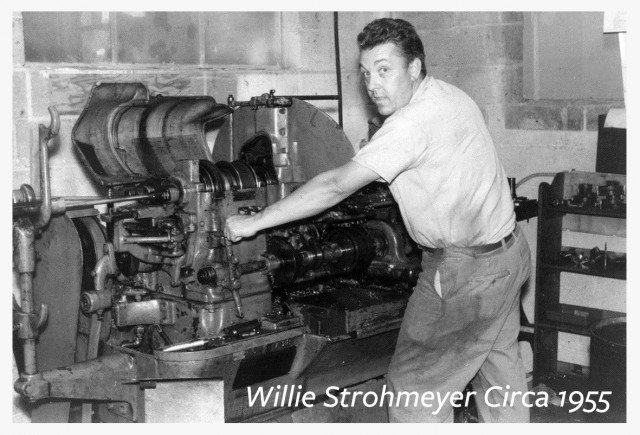 Triangle Manufacturing was founded by Willie Strohmeyer in 1955 in a suburban New Jersey garage.

“My grandfather was working in an aerospace shop in Teterboro after returning home from World War II,” Strohmeyer said. “A very skilled tool and die maker, he had a passion and a belief for how things should be done the right way.”

According to Strohmeyer, a foreman approached his grandfather and suggested that, because he had a real knack for the trade and a “strong head,” he might consider going into business for himself.

“So, my grandfather started working nights with two other gentlemen at the time and grew the business from there,” Strohmeyer said.

Neal Strohmeyer, the company’s current CEO and Dax Strohmeyer’s father, started on the factory floor in 1971, working under the same roof with his father, his mother, his sister and his brother.

The small business then employed two dozen and was mostly focused on the military, aerospace and defense industries for the first few decades, Strohmeyer said. However, as defense spending began to decline after the Reagan era, his father began to seek diversified clients.

“My father developed relationships with a few folks at an orthopedics company now known as Stryker,” Strohmeyer said. “He casually said, ‘You guys use some metal components and we make metal components, so how can I get some work out of you guys?’

“They told him that if he was good at cutting titanium, that was a good way for him to get his foot in the door in the medical device industry.”

Once the business began focusing on the engineering and manufacturing of medical and implantable devices, the family business would quadruple in size.

Still, Dax Strohmeyer was initially not interested in joining. 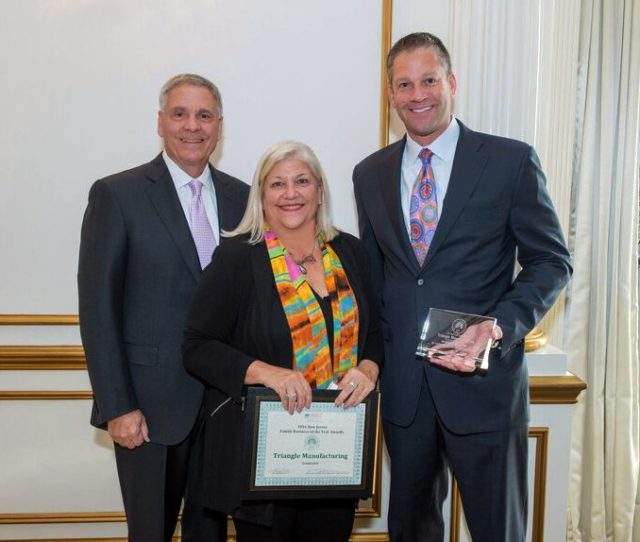 (Neal, Diane, and Dax in 2016 after being nominated as one of New Jersey’s Family Businesses of the Year by The Rothman Institute of Innovation and Entrepreneurship)

After completing his football career at Rutgers, Strohmeyer was signed by the New York Jets as a free agent.

“I had two camps with the Jets and was released before they re-signed me at the end of the season and sent me to NFL Europe, where I played a season over there with the Berlin Thunder,” Strohmeyer said. “I then came home, made the active roster and was released the first week of the season before (the) Philadelphia (Eagles) picked me up for a year on their practice squad.”

“I called my father and said, ‘I’ve got a car payment and I’ve got to pay rent, do you think you could help me out?’ ” he said.

Strohmeyer joined Triangle in 2001 before trying his luck at a career in football once more.

“I went up to the Canadian Football League, where my defensive coordinator from Rutgers was coaching, and ruptured my Achilles’ during camp,” he said. “That’s when I decided to get more serious about making a career at Triangle.”

Strohmeyer said he also started working additional nights as a machinist on the shop floor to earn more money.

“I did not have a lot of exposure to working with my father early on,” he said. “I was busy learning the trade and the industry, while he was busy running the organization.

“But, over the course of time, my father’s interest in the day-to-day started to fade and he no longer had the energy to be fully engaged in operations.”

Strohmeyer was named president in 2010 while his father transitioned to CEO. 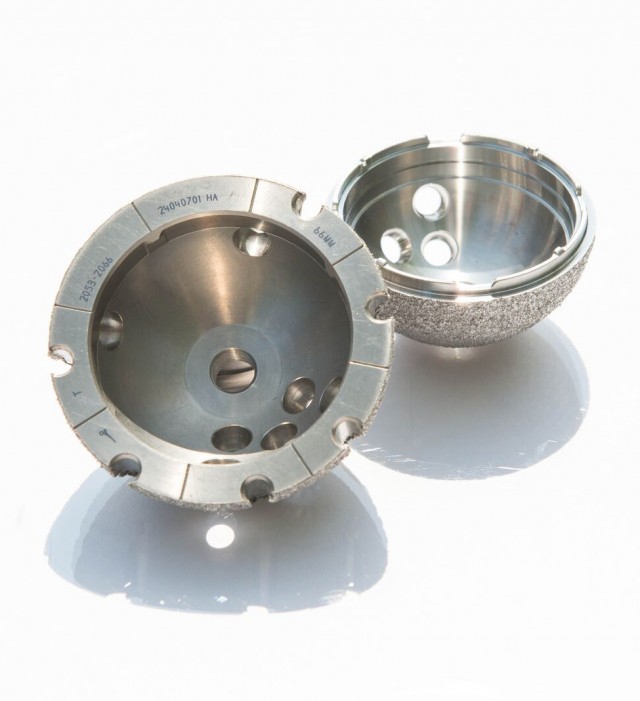 That, plus order-to-shop cycle times as fast as 48 hours and small-batch production capabilities with no premiums for short runs, makes Triangle Manufacturing one of the best in the business, Strohmeyer said.

“Part of our competitive advantage in the market is that we go after a lot of the more difficult work that is out there, requiring very tight tolerances and highly complex geometry,” Strohmeyer said. “We’ve got a knack for doing the tough stuff well.”

It is no wonder, then, that 70 percent of Triangle’s clients have partnered with the company for 10 years or more, and eight of its clients are among the Top 10 world leaders in orthopedic devices.

“We’re also very focused on building the right team,” Strohmeyer said. “We not only go out to find highly skilled folks, but also we focus on advancing skillsets and developing career paths to retain them, too.”

“My days are actually pretty fun,” he said.

“I’m now involved in everything from operations, sales and marketing, to quality assurance, human resources and finance. I wear a lot of hats and try to set some good strategies for short- and long-term successes.”

Future of business and industry

As he continues to work with his father and his aunt in an industry rife with consolidation, Dax Strohmeyer, president of Triangle Manufacturing, said his strategy and goal is for the Upper Saddle River company to remain privately held.

“That way, if the opportunity arises for, say, my children to eventually become part of the business, well, that’d be a pretty cool thing to see,” he said.

He also has no intention to move Triangle out of state, like many other manufacturers are considering.

“I grew up in Upper Saddle River, I attended Rutgers and I lived in South Jersey while I played for Philadelphia,” Strohmeyer said. “I have a real passion for the state, and most of the associations I am affiliated with outside of work, such as the New Jersey Manufacturing Extension Program and the Commerce and Industry Association of New Jersey, are focused on trying to improve the business climate here.

“I’m working very hard to try and bring Triangle Manufacturing into the 21st century, not only in terms of our technology and our processes, but also in terms of being a progressive organization that thinks outside of the box, so we are set up for sustained success for decades to come.”

Triangle Manufacturing’s workforce has increased by 167 percent since 2005, with the company now employing nearly 240.

“Still, one of our biggest challenges is finding skilled people, especially in manufacturing,” Strohmeyer said. “It is not like it was more than 50 years ago, where there were a number of young kids not necessarily looking to go to college but instead wanting to get into a trade.

“Today, students want to go to college to get into what they consider professional careers, not necessarily realizing the opportunities there are to be making six figures as a CNC machinist or a manufacturing engineer right here in Bergen County.”

“We actively promote ourselves as an option for these talented young folks to take that first step into their career out of school,” he said.

To that end, Strohmeyer said he has begun implementing flexible work schedules and paid time off policies.

“Starting this year, there is no set amount of time that any one individual can take off,” he said. “While we still need to plan our time and meet our business objectives, if people need to take off for whatever reason, we try to accommodate that as best as possible.”

Strohmeyer said he also would like to become a completely paperless company within five years by leveraging new computer programs and technologies.

“I want to make Triangle as lean and as efficient as possible, so we can continue to be competitive in the marketplace,” he said. “We want to follow industry trends, not just in manufacturing, but also seeing what other progressive companies are doing.

“There’s nothing wrong with copying good ideas from other companies.”